A while back I was discussing a satirical political party that a friend had founded some years ago for online political roleplaying games. His stated purpose for this political party was to "defend the right of the people to be lied to by their government" (it's here I should note that I am American and my friend is British). I wrote this party into a story I wrote and later proposed a logo.

This logo was intended to be the most offensive logo in history. It had a swastika, a hammer and sickle, a star of David, an Islamic star and crescent, a Christian cross, an Illuminati eye, a Confederate flag, an LGBT flag, a flag of the Islamic State, and a flag that was intended to look like that of the Ku Klux Klan (but was in reality the flag of a Filipino independence movement), with the ultimate intention of demonstrating the irrationality of bigotry.

My friend was horrified at such a logo, saying that such topics were not laughing matters and should not be joked about. This conflicted with my opinion that anything can be made fun of in amusing manners (although there are specific times and places for such things). I came to a certain conclusion; both my worldview and his worldview strive for egalitarianism, but take distinct views of human culture and diversity.

Either everything is sacred, or nothing is.

His belief is predicated upon that all humanity is inherently equal (a view I share), and that no culture should be degraded as such. This is a certainly rosy view of the world, and an admirable one. My friend does so earnestly believe in the equality of human beings, and that all should be valued. To this point of view, making light of prejudice, bigotry, and their nastier realizations such as slavery and genocide is demeaning and minimizing of their impact. The root assumption of all this is that human beings inherently, objectively have value.

I dispute that last assumption. Human civilization is a brew of socially constructed mores and structures that work together well enough to form a cohesive whole. The underlying truth behind this, though, is that it's all arbitrary in the end. No race, sexuality, gender, religion, et cetera has any inherent superiority over one another, only superiority in the context of a socially constructed society. When this is taken into account, all bigotry becomes illogical and ridiculous; why claim any particular demographic group is superior to another when said demography is ultimately meaningless? The problem comes in when societies organize themselves such that certain demographics have advantages over others, creating a self-perpetuating cycle of bigotry and intolerance, advantage and disadvantage, that solidifies this irrational distinction.

Hence is the core of my belief and why I feel it to be egalitarian; under it, all human distinction is the same worthless arbitrariness. Hence why I feel there are times when making fun of the worst this species has to offer is warranted and amusing; they all come from a fundamentally ridiculous view of the world that denies that very real arbitrariness. We're all, at the core, the same, so why not mock the denial of that truth?
Posted by Alex Wallace at 3:46 AM No comments:

For any readers that may be interested in Alternate History (and I know that some of you, considering the spike in views I've gotten after Matt Mitrovich was kind enough to link to this blog on the Alternate History Weekly Update), I am now on three lesser known alternate history sites. These are:

The bulk of my work from alternatehistory.com has been moved to these sites and the rest will be brought over soon.

All of these sites have wonderful communities and are run by capable administrators. I highly recommend that you take a look at them.
Posted by Alex Wallace at 9:14 PM No comments:

Government as Agglomeration: or, why multiple people can be right at once


So there was an email recently released via a Freedom of Information Act request from the American State Department said that a French desire for oil and gold was a factor in their support invasion of Libya, as well as the desire to gain economic and political power for France in the Mediterranean Sea. These were some (and I emphasize some) of the reasons for the 2011 intervention in Libya.

This sounds like ultimate vindication for Western conspiracy theorists and for the Russian government and its allies. I would say that they aren't wrong. However, I will also say that those who maintain that resources were the sole (and I emphasize that word for a reason) reason for entering Libya.

Now, consider what a 'government' is: a social construct of thousands of people working together to achieve various domestic and international goals. Also consider that people hardly ever see eye to eye, and that people have different motivations for doing the same thing. Governments are, in essence, agglomerations of various points of view with different intentions for said agglomeration's course of action.

Let's take the claim that the United States invaded Iraq for oil. Various proposed reasons for the invasion I have seen include the following:

Among others. It's no secret that the US wanted to invade Iraq after 9/11; communiques from Donald Rumsfeld show him looking for a justification. However, Donald Rumsfeld is just one man, as are George W. Bush, Dick Cheney, and Tony Blair. And, note, that these men were only four out of many that were involved in making that decision. 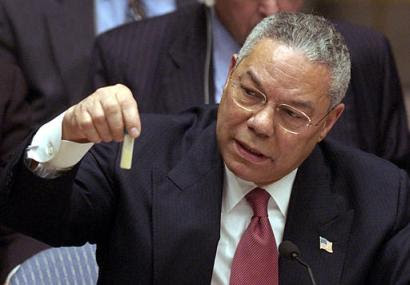 Colin Powell at the United Nations, talking about Anthrax and his fear of Iraqi WMDs

Clearly, these people were able to agree that invading Iraq was in their best interest. However, the reasons for why they endorsed such a decision vary tremendously. Going off that, I believe all the reasons I listed above and more are reasons for the invasion. Do I think that oil was a factor in the invasion plan? Yes. Do I believe that it was the only reason? No. Do I believe that the oil companies were ecstatic upon hearing the decision? Definitely.

So nobody is wrong, I believe, about the Invasion of Iraq, to one degree or another. I feel that the intervention in Libya is much the same: different interests coming together on a course of action, a course of action in this case involved bombings and no-fly zones.

Posted by Alex Wallace at 8:46 PM No comments:


Just wanted to wish a happy 2016 to all you good people. I know this is technically a day late from my time zone but nevertheless, I wanted to wish you the best.


Hope the world doesn't go to hell at an increased pace like it has been for a while.
Posted by Alex Wallace at 1:04 AM No comments:

Merry Christmas to All


I know that this blog hasn't been up for very long, but I would still like to wish you all a Merry Christmas, or whatever holiday you celebrate. I hope you all have a wonderful time with your families and have a peaceful and cheery time.


Enjoy Joy to the World as recorded by the Mormon Tabernacle Choir (I told you I liked these people).
Posted by Alex Wallace at 2:29 AM No comments:

In Praise of the Mormon Tabernacle Choir

This isn't a serious post about actual issues. Not in the slightest. But given it's almost Christmas I figured I might as well write this.

A lot of people don't like Mormons, for some reason. I think this is silly; disliking people for their religion is just sort of a bad thing. I've met wonderful people who were Mormons. And I think it was awfully dumb of people to dislike Mitt Romney because he was Mormon due to the presence of a whole slew of far more rational reasons to dislike him.

But the thing I like the most about the Mormons is the Mormon Tabernacle Choir. These people are awesome. Last December I found their recordings of Christmas music and was utterly, utterly blown away.

To demonstrate, take a listen to the only recording of Jingle Bells that can be described truthfully as 'epic.'


It sounds amazing and the arranger, James Pierpont, gives the song an almost Wagnerian grandeur to it. The modulations make it sound absolutely eerie at times.

They also do great things with Joy to the World and the Ukrainian Bell Carol, among others. Leaving Christmas music, they also do the best version of the Battle Hymn of the Republic I've ever heard, and also a great Columbia, the Gem of the Ocean.

That's it. Happy [insert end of year holiday of your choice here]
Posted by Alex Wallace at 2:21 AM No comments:

So I've been Interviewed, and other stuff.

Just wanted to let you know, if you've been wondering what the hell is going on in my mind (which I seriously doubt, but whatever) I was interviewed on Alternate History Fiction about the stuff I write on alternatehistory.com. Enjoy.

Also, on that note, I've been moving a lot of my work over to Althistoria, so if you make an account there (which takes a lot less time than alternatehistory.com; so far as I can tell you don't need administrative approval) you can see them, and I'm moving more over soon. It has a better interface (i.e. one that wasn't last updated in 2004).

So yeah. That's this update. Enjoy some Brian Setzer Christmas music.
Posted by Alex Wallace at 12:49 PM No comments:

Alex Wallace
I am literally just some guy with no relevance to anything. I grew up inside the beltway, where the laws of reality are suspended; I know how Washington works. It was there when I was a kid until I moved to college. Here I will post all sorts of musings that I feel like writing down but have nowhere else to put.